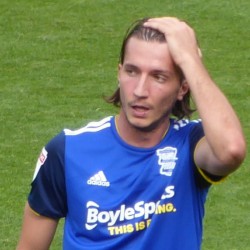 Ivan Šunjić (born 9 October 1996) is a Croatian professional footballer who plays as a defensive midfielder for English Championship club Birmingham City. He previously played for Lokomotiva and Dinamo Zagreb.

Club career
Born in Zenica, Bosnia and Herzegovina, Šunjić made his professional debut with Dinamo Zagreb in the 2013–14 season.

Lokomotiva Zagreb
After appearing only for the reserves, he joined Lokomotiva on 10 February 2016. On 13 May 2017, he scored his first goal for the club in the dying minutes of a 2–0 league victory over Inter Zaprešić. Ahead of the 2017–18 season, Šunjić was made the club captain. On 15 September, he scored the winning goal in the final minutes of a 1–0 league victory against Cibalia.

On 12 February 2018, Šunjić rejoined Dinamo Zagreb and signed a contract until 15 June 2023. However, at the same time, he was loaned to Lokomotiva for the rest of the season.

Birmingham City
On 26 July 2019, Šunjić signed a five-year contract with Birmingham City of the English Championship. The officially undisclosed fee was reported as €7 million. He made his debut as a second-half substitute in Birmingham's opening fixture of the season, a 1–0 win away against Brentford on 3 August 2019.

International career
Šunjić was included in Croatia's squad for the 2013 Under-17 World Cup, and played all three group matches.

Šunjić was called up to the senior national team for a friendly match against Mexico in the United States on 28 May. He played the whole of the match, in which an inexperienced Croatia team comprising largely debutants and reduced to ten men secured a 2–1 victory against a relatively strong Mexican side.

He captained Croatia at the 2019 UEFA European Under-21 Championships and played all three of their matches.