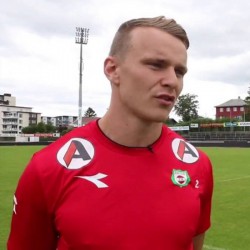 Marius Lode (born 11 March 1993) is Norwegian professional footballer who plays as a defender for Schalke04.

Club career
Lode was born in Kvernaland, and started his career in local Frøyland IL.

He made his senior debut for Bryne FK on 9 April 2012 against Strømmen; Bryne won that match 3–1. He played as a defender for Bryne until May 2015, when he was banned from playing professional football, due to a positive drug test, that showed use of Ritalin, a medicinal stimulant drug consisting of methylphenidate. Lode tested positive on Ritalin in May 2015, before a match against Sogndal. Lode used Ritalin as performance enhancing drug before university exams, according to himself. Lode was banned from playing football in ten months and lost the 2016 season. During the ban, Lode worked in a local restaurant in Bryne and maintained his physique, until he was allowed to train with Bryne FK in October 2016.

Lode signed for Bodø/Glimt before the season in 2017, playing 29 out of 30 matches that season. Bodø/Glimt won the Norwegian first division in 2017 and was promoted to Eliteserien. Before the 2018 season, some Norwegian football clubs were interested in buying Lode, including the relegated teams Viking and Aalesund.