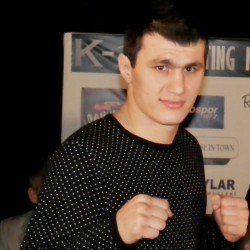 Biography and career
Magomed Magomedov is an ethnic Avar, he was born in Makhachkala, Dagestan. Before turning pro he had over 100 wins as an amateur, was a two time Amateur World champion, European champion and six time Russian champion. He turned pro in 2001 and moved to Bangkok, Thailand. Started training at the Rompo Gym with his brothers Arslan and Alipdek Magomedov who both are professional fighters as well.

His first professional WMC World title match was in 2004, against Australian Nathan Corbett. Magomedov lost the five round battle by unanimous decision. A month later he moved up a weight class and won the WMC World Title against Clifton Brown.

In 2006 on his rookie year in K-1, he won two tournaments in Sweden and in Czech Republic and qualified for K-1 World GP 2007 in Amsterdam.

On August 12, 2006 he was scheduled to participate at K-1 World Grand Prix 2006 in Las Vegas II but the last moment visa problems kept him out of the United States. He was replaced by Gary Goodridge.

On November 2, 2007 at K-1 Fighting Network Turkey 2007 Magomedov fought against Gökhan Saki. After the fight there was a misunderstanding between both fighters, when Saki kicked him at the end of the match to instigate that he wants to hug him. Magomedov however, thought it was unsportsmanlike, and gave Saki a head butt. Then a brawl ensued, between trainers and managers, but ultimately, everything was settled and the two fighters gave each other a hand. Magomedov lost by unanimous decision.