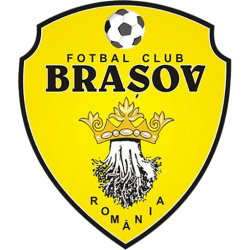 The team was formed in the summer of 2021 and regard themselves as the succesors of the original FC Brașov which was dissolved in 2017. FC Brașov-Steagul Renaște began competing in the second division since the 2021–22 season. Silviu Ploeșteanu Stadium has been the home ground of both entities and has a capacity of 8,800 seats.

Stadionul Silviu Ploeșteanu, previously known as Stadionul Tineretului, is a multi-purpose stadium in Brașov, Romania. It is currently used mostly for football matches and is the home ground of SR Brașov and Corona Brașov. The arena was named after Silviu Ploeșteanu on April 13, 2002, who managed the club between 1948 and 1968.

The central section of the stadium's North stand is the second oldest in Romanian football, its lateral sections being completed in 1980. The South stand was built in 1956, and the East and West stands were inaugurated in the 1969–1970 season. The East stand was eventually demolished in the summer of 2008.