Hannoverscher Sportverein von 1896, commonly referred to as Hannover 96 , Hannover, HSV (although this may cause confusion with Hamburger SV) or simply 96, is a German association football club based in the city of Hanover, Lower Saxony. Hannover 96 play in the Bundesliga, the top tier in the German football league system.

Hannover 96 was founded in 1896. Hannover have won two German championships and one DFB-Pokal. Hannover's stadium is the HDI-Arena. Hannover 96 has a big rivalry with VfL Wolfsburg and Eintracht Braunschweig.

Hannover 96 was founded on 12 April 1896 as Hannoverscher Fußball-Club 1896, upon the suggestion of Ferdinand-Wilhelm Fricke, founder of the Deutscher FV 1878 Hannover. Their initial enthusiasm was for athletics and rugby; football did not become their primary interest until 1899. Most of the membership of Germania 1902 Hannover became part of 96 in 1902, while others of the club formed Hannoverscher Ballspielverein. In 1913, they merged with Ballverein 1898 Hannovera (formed in the 1905 merger of Fußballverein Hannovera 1898 Hannover and Hannoverscher BV) to become Hannoverscher Sportverein 1896. Hannoverscher FC's colours were black-white-green, but they played in blue, while BV played in red. The newly united team kept black-white-green as the club colours, but they chose to take to the field in red, giving the team the nickname Die Roten (en: The Reds). The team's third jersey is in the club's official colours. The club made regular appearances in the national playoffs through the early 1900s, but were unable to progress past Eintracht Braunschweig, planting the seeds of a rivalry that has survived to this day. HSV continued to field strong sides and make national level appearances on into the 1920s. Under the Third Reich, German football was re-organized into 16 top-flight leagues in 1933 and Hannover became part of the Gauliga Niedersachsen. They appeared in the country's final rounds in 1935 and sent representatives to the national side the next year. They won their first national championship in 1938 in what was one of the biggest upsets in German football history when they beat Schalke 04, the most dominant side in the country in the era. The two sides played to a 3:3 draw before Hannover prevailed 4:3 in a tension filled re-match. In 1942, the team moved to the newly formed Gauliga Braunschweig-Südhannover.
Hannover 96 play in the 2. Bundesliga, the second tier in the German football league system, having been relegated from the Bundesliga, Germany's first tier, after finishing 17th in the 2018–19 season. 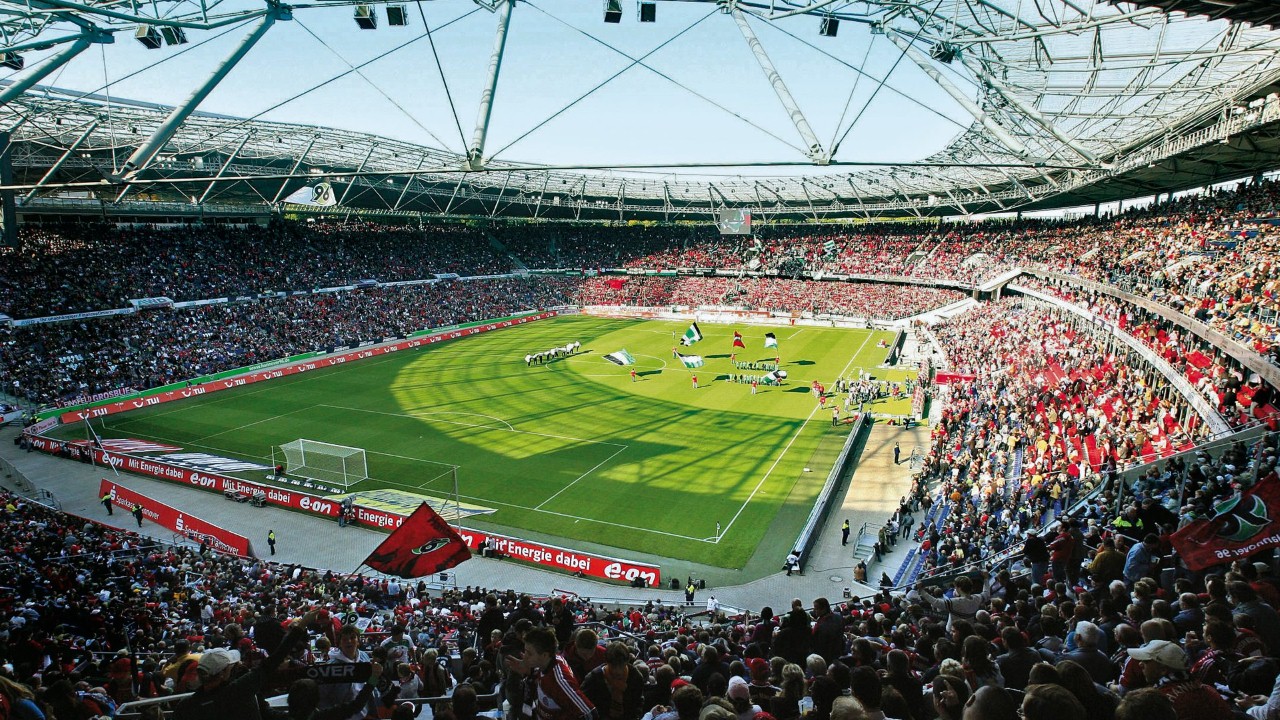 The Niedersachsenstadion (Eng: Lower Saxony Stadium) is a football stadium in Hanover, Lower Saxony, Germany, which is home to Bundesliga football club Hannover 96.

The original 86,000 capacity stadium was completed in 1954 and has since been rebuilt several times for various major football events. Today it has 49,000 covered seats. During the World Cup 2006 the stadium was named FIFA World Cup Stadium, Hanover.

Through a sponsorship deal, the stadium's official name is currently HDI-Arena . Between 2002 and 2013 a similar arrangement saw the stadium renamed as the AWD-Arena .

The stadium was built between 1952–1954, with an original capacity of 86,000. Huge amounts of debris from the houses in Hannover destroyed during World War II were used as the foundations of the stadium, with a total construction cost of 4 million Deutschmark. The stadium officially opened on 26 September 1954.

On 17 November 2015, the stadium was due to host an international friendly between Germany and the Netherlands. However, the match was postponed two hours before kick off following reports of a "concrete security threat" and "intention to ignite explosives". The stadium and surrounding areas were evacuated, though no explosives were found.