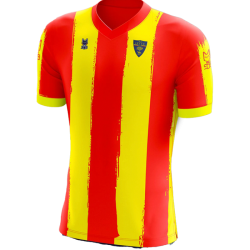 Union Sportiva Lecce, commonly referred to as Lecce, is an Italian football club based in Lecce, Apulia. The club will play in Serie A in the 2022–23 season, the top level of the Italian football pyramid, having been promoted from Serie B. Lecce plays its home games at Stadio Via del Mare, which has a capacity of 31,533 spectators.

The club was formed in the 1927 upon an idea of 1908 and has spent a large part of their recent history bouncing between Italy's second division and Serie A, where the team debuted in the 1985–86 season. Its best Serie A finish is the ninth place obtained in the 1988–89 season. The club is 27th in the Serie A all-time table and is the second club from Apulia as regards appearances in the first two tiers of Italian football, with 16 Serie A seasons and 29 Serie B seasons.