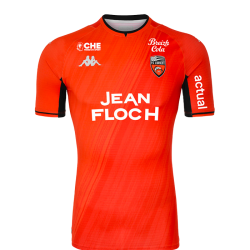 Football Club Lorient-Bretagne Sud (commonly referred to FC Lorient or simply Lorient) is a French association football club based in Lorient, Brittany. The club was founded in 1926 and will play in Ligue 1 in the 2020–21 season after promotion from Ligue 2 in the 2019–20 season. Lorient plays its home matches at the stade Yves Allainmat, named after the former mayor of Lorient. The stadium is surnamed Stade du Moustoir because of its location within the city. The team is managed by Christophe Pélissier.

Lorient had a relatively bleak history nationally prior to 1998 when the club made its first appearance in Ligue 1 in the 1998–99 season. Prior to that, Lorient spent the majority of its life as an amateur club. Lorient's achieved its biggest honour in 2002 when the club won the Coupe de France defeating Bastia 1–0 in the final. Lorient has never won Ligue 1, but has won the Championnat National earning this honour in 1995. Regionally, the club has won five Brittany Division d'Honneur titles and six Coupe de Bretagne. Stade du Moustoir is a multi-use stadium in Lorient, France. It is currently used mostly for football matches and is the home stadium of FC Lorient. The stadium can hold up to 16,392 with the new south tribune.