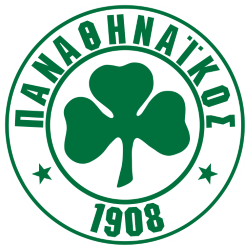 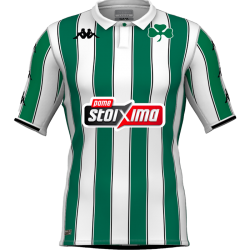 Panathinaikos F.C. (Greek: ΠΑΕ Παναθηναϊκός Α.Ο.), also known simply as Panathinaikos, or with its full name Panathinaikos A.O. (Greek: Παναθηναϊκός Αθλητικός Όμιλος, transliterated "Panathinaikos Athlitikos Omilos", Panathenaic Athletic Club) are a Greek professional football club based in the City of Athens. Panathinaikos can literally be translated as "Panathenaic", which means "of all Athens". The name "Panathinaikos" was inspired by the ancient work of Isocrates Panathenaicus, where the orator praise the Athenians for their democratic education and their military superiority, which use it for benefit of all Greeks.

Today a part of Panathinaikos A.O., they are the oldest active football club in Greece founded just for football. Created in 1908 as "Podosfairikos Omilos Athinon" (Football Club of Athens), they play in the Super League Greece are one of the most successful clubs in Greek football and is one of three clubs which have never been relegated from the top division. They have won 20 Greek Championships, 18 Greek Cups, 4 Greek Super Cups and 8 Doubles. They are the only club that have won a championship without a loss in a top-flight campaign (1964). Panathinaikos is also the most successful Greek club in terms of achievements in the European competitions. It is the only Greek team that has reached the European Cup (later changed to UEFA Champions League) final in 1971, and also the semi-finals twice, in 1985 and 1996. It is also the only Greek team that has played for the Intercontinental Cup (1971). Furthermore, they have reached the quarter-finals of UEFA Champions League two more times (in 1992 and 2002) and also the quarter-finals of UEFA Cup twice (in 1988 and 2003). They have won also once the Balkans Cup in 1977. Panathinaikos is a member of the European Club Association.

Since the 50s', the club maintains some of the oldest and most successful academies in Greece producing and preparing new footballers for the first team and feeding also the Greek national football team. Panathinaikos F.C. became professional and independent in 1979. They have played their home games in the Apostolos Nikolaidis Stadium – which is considered as their traditional home ground – and the Athens Olympic Stadium.

According to the vast majority of researches and polls, it is the second most popular football team in Greece with the difference behind Olympiacos to be varied between 1% to 6,5% and the difference in front of the third to be fluctuated between 17% to 21% among the fans. The club has million of fans inside Greece and millions of others in the Greek communities all over the world. Panathinaikos FC currently is the only supporter-owned football club in Greece.

They hold a long-term rivalry with Olympiacos and matches between the two teams are referred to as "Derby of the eternal enemies".

Apostolos Nikolaidis Stadium (Greek: Στάδιο Απόστολος Νικολαΐδης) is a football stadium and multi-sport center in Athens, Greece. It was inaugurated in 1922 and is the oldest football stadium in Greece currently active. It is the traditional athletic center of Panathinaikos A.C. and has been the home ground of Panathinaikos FC for the most part of the club's existence.

The stadium is named after the historic club's president, official and athlete Apostolos Nikolaidis. It is situated in the Ambelokipi district of Athens, east of the Lycabettus Hill and on Alexandras Avenue, by which name it is most commonly known (Leoforos Alexandras or simply Leoforos, Leoforos meaning Avenue). The stadium's record attendance was recorded in 1967, when 29,665 spectators watched the Cup Winners Cup game between Panathinaikos and FC Bayern Munich.

The venue also houses a small basketball and volleyball court, a small swimming pool, a boxing ring, club's offices and various other facilities.