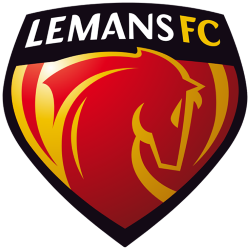 Le Mans Football Club (French pronunciation: ​; commonly referred to as Le Mans FC, formerly referred as Le Muc) is a French association football club based in Le Mans. The club was founded in 1985 as a result of a merger under the name Le Mans Union Club 72. In 2010, Le Mans changed its name to Le Mans FC to coincide with the re-modeling of the club, which includes moving into a new stadium, MMArena, which opened in January 2011. The stadium is based in the interior of the famous circuit in the city.

The club were controversially relegated from 2019–20 Ligue 2 when the season was terminated early due to the COVID-19 pandemic.

Stade Le Mans is a multi-use stadium in Le Mans, France, that opened in January 2011. It is used mostly for football matches and hosted the home matches of Le Mans FC. The stadium has a capacity of 25,000 people. It replaced the Stade Léon-Bollée as the club's stadium.

The arena is located inside the Circuit de la Sarthe, home of the famous 24 Hours of Le Mans, and adjacent the first right kink on the Mulsanne Straight.