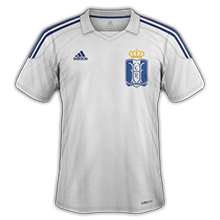 Real Club Recreativo de Huelva, S.A.D. (Spanish pronunciation: ) is a Spanish football club based in Huelva, in the autonomous community of Andalusia. Founded on 23 December 1889, it currently plays in Segunda División B – Group 4, holding home games at Estadio Nuevo Colombino, which has a 21,600 capacity.

Estadio Nuevo Colombino is a multi-purpose stadium in Huelva, Spain. It is currently used mostly for football matches and is the home ground of Recreativo de Huelva. Football was first introduced to Spain in Huelva and it still hosts the annual Trofeo Colombino, one of the traditional curtain-raisers to the Spanish football season. The new stadium holds 21,670 and was built in 2001. It replaced Estadio Colombino. Estadio Nuevo Colombino hosted a Spain international match on 15 November 2014, a European Championship Qualifying match against Belarus.