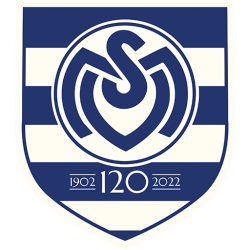 Meidericher Spielverein 02 e. V. Duisburg, commonly known as simply MSV Duisburg, is a German association football club based in Duisburg, North Rhine-Westphalia. Nicknamed Die Zebras for their traditional striped jerseys, the club was one of the original members of the Bundesliga when it was formed in 1963.

MSV-Arena, currently known for sponsorship purposes as the Schauinsland-Reisen-Arena, is a football stadium in Duisburg, North Rhine-Westphalia, Germany, built in 2004. The stadium is the home of MSV Duisburg and holds 31,500 people. It was built on the site of the old Wedaustadion. The stadium was the venue of the 2005 World Games.