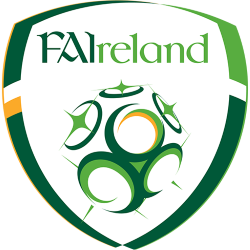 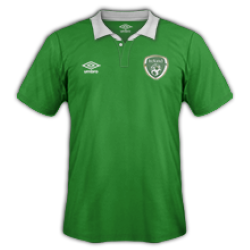 Nicknames
The Boys in Green

The Republic of Ireland national football team (Irish: Foireann peile náisiúnta Phoblacht na hÉireann) represents Ireland in association football. It is governed by the Football Association of Ireland (FAI) and plays its home fixtures at the Aviva Stadium in Dublin.

The team made their debut at the 1924 Summer Olympics, reaching the quarter-finals. Between 1924 and 1936, the team competed as the Irish Free State and from then until 1950, it was referred to by the FAI as Éire or Ireland. In 1953, FIFA decreed that for competitive matches in tournaments that both Irish teams may enter, the FAI team would be officially called the Republic of Ireland while the IFA team was to be named Northern Ireland. Northern Ireland was allowed to use the title Ireland by FIFA in the Home International Competition until it was discontinued in 1984. The Republic of Ireland was the first nation from outside the United Kingdom to defeat England at home at a fixture played at Goodison Park, Liverpool, in 1949. The team also reached the quarter-final stage of the 1964 European Nations' Cup, where they lost to the eventual winners Spain.

Under the guidance of Jack Charlton, the team enjoyed its most successful era, reaching their highest FIFA world ranking ever at sixth in August 1993, and qualifying for UEFA Euro 1988 in their first appearance at the UEFA European Championship, reaching the quarter-finals of the 1990 FIFA World Cup in their first ever appearance at the finals, as well as making the last 16 at the 1994 edition. Charlton's successor Mick McCarthy lost out on the next two major tournaments but ultimately qualified for the 2002 World Cup, making it to the last 16. Under Giovanni Trapattoni, the team narrowly lost out on qualification for the 2010 World Cup during a controversial play-off, but went on to qualify for Euro 2012.

The team failed to qualify for the 2014 World Cup in Brazil, marking the end of Trapattoni's tenure as manager. The Republic of Ireland also fell to a record low FIFA ranking of 59th, then a record low of 70th in June 2014. For the next Euro qualifying campaign under manager Martin O'Neill, the Republic of Ireland finished third behind Germany and Poland, but went on to qualify for Euro 2016 after a 3–1 aggregate win over Bosnia and Herzegovina in the play-offs. The Boys in Green reached the Round of 16 stage at that tournament and were knocked out by the hosts and eventual runners-up France after losing 2–1.

The Aviva Stadium (also known as Lansdowne Road; Irish: Staid Aviva) is a sports stadium located in Dublin, Ireland, with a capacity for 51,700 spectators (all seated). It is built on the site of the former Lansdowne Road stadium, which was demolished in 2007, and replacing it as home to its chief tenants: the Irish rugby union team and the Republic of Ireland football team. The decision to redevelop the stadium came after plans for both Stadium Ireland and Eircom Park fell through. Aviva Group Ireland signed a 10-year deal for the naming rights in 2009.

The stadium, located adjacent to Lansdowne Road railway station, officially opened on 14 May 2010. The stadium is Ireland's first, and only, UEFA Category 4 Stadium and in 2011, it hosted the Europa League Final. It also hosted the inaugural Nations Cup, as well as the regular home fixtures of the national rugby team, national football team and some home fixtures for Leinster Rugby from August 2010 onwards.