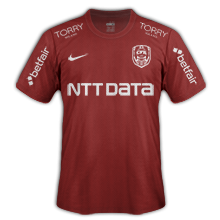 Fotbal Club CFR 1907 Cluj is a Romanian professional football club based in the city of Cluj-Napoca, Cluj County. It was founded in 1907 and the current name "CFR" is the acronym for Căile Ferate Române ("Romanian Railways").

Before receiving significant financial support from previous owner Árpád Pászkány in 2002, the club had spent most of its existence in the lower divisions. Since returning to the top flight in 2004, CFR Cluj has relied increasingly on foreign players for its success. In the 2005–06 season, they participated in their first European competition, the Intertoto Cup, finishing as runners-up. In the 2007–08 campaign, they were champions of Liga I for the first time in their history, taking the national title away from capital-based teams after seventeen years and consequently qualifying for the UEFA Champions League group stage in the process. Only six years earlier, CFR was playing in the third tier of the Romanian football league system. Between 2018 and 2019, "the White and Burgundies" won back-to-back championships for the first time. CFR has won a total of twelve domestic trophies, all in the 21st century—five Liga I, four Cupa României, and three Supercupa României.

CFR has a fierce rivalry with neighbouring Universitatea Cluj, with matches between the two being known as the Derbiul Clujului.