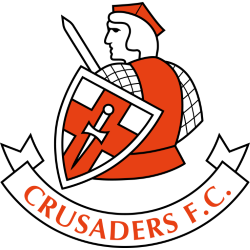 Crusaders Football Club is a Northern Irish semi-professional football club, playing in the NIFL Premiership. The club, founded in 1898, hails from Belfast and plays its home matches at Seaview. Club colours are red and black. The current manager is former player Stephen Baxter, who is the club's longest serving manager, having been appointed in 2005. Crusaders played intermediate football until 1949, and during that time they were one of the top non-league teams in the country. The withdrawal of Belfast Celtic from the senior ranks in 1949 resulted in Crusaders being elected in their place in time for the start of the 1949–50 season.

The club's fierce rivals are Cliftonville. Matches between the two clubs are known as the North Belfast derby. Rivalries also exist with other Belfast sides such as Linfield and Glentoran.

Seaview is a football stadium in Belfast, Northern Ireland. It is the home ground of Crusaders F.C. and Newington Youth F.C., and traditionally hosts the final of the Steel & Sons Cup on Christmas Day. The stadium holds 3,383, and has a 4G playing surface.

Seaview has undergone considerable redevelopment in recent seasons, with new changing rooms, dug-outs and main-stand seats being installed. Three new stands at either end of the ground and on its southern side were opened in July 2011 to replace the previous terracing.

Seaview was opened in 1921 as the home venue of Crusaders Football Club and is located on the Shore Road, approximately one mile north of Belfast city centre. The ground is flanked by the Shore Road behind one goal and the Belfast-to-Larne railway behind the other. The main entrance to the ground is on St Vincent Street while the opposite side of the ground backs on to a goods warehouse yard from a side street off the Shore Road.

In addition to hosting Crusaders and Newington Youth, the ground is the traditional venue for the Christmas Day final of the Steel & Sons Cup, an intermediate competition organised by the County Antrim & District F.A.