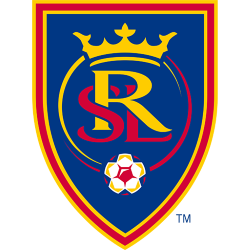 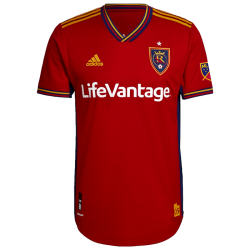 Real Salt Lake (RSL) is an American professional soccer club based in Sandy, Utah, a suburb of Salt Lake City. The team competes as a member of the Western Conference in Major League Soccer (MLS). They play their home games at Rio Tinto Stadium. Real Salt Lake won the 2009 MLS Cup and were runners-up of the 2013 MLS Cup, the 2010 MLS Supporters Shield, the 2010-11 CONCACAF Champions League, and the 2013 Lamar Hunt U.S. Open Cup. The team's head coach is former MLS goalkeeper Jeff Cassar.

RSL began play on April 2, 2005, by coach John Ellinger, in a windy, rain-soaked game against New York MetroStars at Giants Stadium in New Jersey, which ended in a tie. The following week, Jason Kreis scored the first goal in franchise history in a 3-1 loss to LA Galaxy at the Home Depot Center. RSL returned to Utah to play its first-ever home match on April 16. Before 25,287 fans at Rice-Eccles Stadium, Brian Dunseth scored a header in the 81st minute to deliver a 1-0 victory over the rival Colorado Rapids. The season was mostly a disappointment, however, with the team setting a league record by posting a 557-minute scoreless streak (later broken by Toronto FC). They were also on a 10-game losing streak before managing a 2–2 draw on the road against San Jose Earthquakes. The first season finished with a record of 5-22-5 for Real Salt Lake.

In 2006, Real Salt Lake's second MLS season, the team recorded five losses and one tie in the first six matches of the season. RSL had gone 18 consecutive matches without a victory—the longest winless streak in MLS history. The team managed two wins and four draws in their last eight matches, but failed to qualify for the playoffs, finishing with a 10-13-9 record. Cunningham provided most of Real's highlights during the up-and-down 2006 season. He had come to Salt Lake from Colorado in exchange for Mathis, who had been a major disappointment for RSL. Rio Tinto Stadium (commonly referred to as simply Rio Tinto or "The RioT") is an American soccer-specific stadium in Sandy, Utah, that is the home to Major League Soccer club Real Salt Lake and its USL associate team, Real Monarchs. The stadium opened on October 9, 2008, and seats 20,213 for soccer, but can be expanded to over 25,000 for concerts.

The stadium hosted the 2009 MLS All-Star Game, the second leg of the 2011 CONCACAF Champions League Finals, and the final of the 2013 Lamar Hunt US Open Cup. It was also a host stadium during the 2013 CONCACAF Gold Cup.

After considering sites in downtown Salt Lake City, Vineyard, and Provo, a soccer-specific stadium for Real Salt Lake was approved for the city of Sandy, a suburb of Salt Lake City, in late 2005; however, funding for the stadium was hard to come by. A vote in January 2006 struck down a funding proposal for the stadium, and the project was declared "dead" by owner Dave Checketts on the 29th of that month, putting the team's future in doubt. Parties from cities such as Rochester, New York, and St Louis, Missouri expressed interest in purchasing the franchise and moving it, and Checketts announced that the team would likely be sold and moved out of the Salt Lake area by the end of the 2007 season.

In response to the rejection of the stadium plan, local construction company Anderson Geneva offered the club 30 acres of land on which to build the stadium just east of Interstate 15 in Sandy for free, at an estimated loss on the price of the land at US $10 Million. The move prompted the club to make a new proposal to the Utah State Senate on February 2, 2006, in which 15 percent of the hotel taxes collected in Salt Lake County between July 2007 and 2017, equaling about US $2 Million a year, would be diverted to the project. The bill was passed by the Senate, allowing for the club to announce the commencement of building what was then known as "RSL Stadium".

The groundbreaking of the stadium took place on August 12, 2006 featuring elected leaders of the state of Utah, as well as team officials and the rosters of both Real Salt Lake and Spanish club Real Madrid, who were due to play each other in a Xango Cup match a few days after the fact.

On September 28, 2008, it was announced that the naming rights to the stadium were sold to international mining company Rio Tinto, owners of local mining operation Kennecott Utah Copper. A fifteen-year deal was set into place, worth between $1.5 million and $2 million per year.

The stadium finally opened on October 9, 2008, in a Major League Soccer match between Real Salt Lake and the New York Red Bulls.