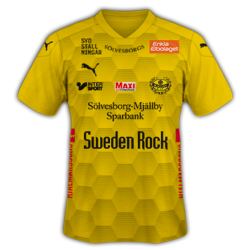 Mjällby Allmänna Idrottsförening, also known simply as Mjällby AIF, Mjällby or (especially locally) MAIF, is a Swedish professional football club based in Hällevik. The club is affiliated to Blekinge Fotbollförbund and play its home games at Strandvallen. The club colours, reflected in their crest and kit, are yellow and black. Formed on 1 April 1939, the club have played eight seasons in Sweden's highest football league Allsvenskan, the club's first season in the league was in 1980. The club are currently playing in Superettan (2nd level). With eight seasons in the top division Allsvenskan most recent in 2014, Mjällby AIF is the most successful football team from the province of Blekinge. Strandvallen is a multi-use stadium in Hällevik, Sweden. It is currently used mostly for football matches and is the home stadium of Mjällby AIF. The stadium holds 7,000 people and was built in 1953.