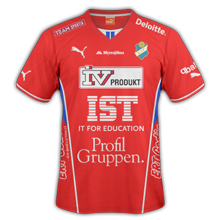 Östers Idrottsförening, commonly known as Östers IF or simply Öster, is a Swedish sports club located in Växjö, specializing in football, and playing in the second tier of Swedish football, Superettan.

The club has previously also competed in ice hockey (see separate article), bandy, and bowling. Öster was formed on 20 April 1930 as Östers Fotbollförening, before adopting the name "Östers IF" in 1932. The club is affiliated to the Smålands Fotbollförbund.

In 1968, their first season in Allsvenskan, Öster became the first team ever to win the national title at their first attempt (newly-promoted IF Elfsborg won the league in 1961 but had played in, and been winners of, the championship in the past). This win ignited the team's 'golden age' which lasted until the early 1980s and saw them win a total of four Swedish championships.

On 31 March 2011, Öster broke ground on their new arena, Myresjöhus Arena, which was inaugurated in August 2012. The arena hosted four games of the UEFA Women's Euro 2013 tournament.

A chart showing the progress of Östers IF through the swedish football league system. The different shades of gray represent league divisions.
Öster (English: "East") was named after a district in the city of Växjö. They were not part of the upper divisions in the early days of swedish football and only made their first appearance in the third tier in 1947. During the 1950s and early-1960s the club made a push to raise the level of football by inviting and playing against foreign teams such as Flamengo, Juventus and Fluminense. This coupled with an increase in the amount of training helped the team establish themselves in the second tier.

In 1961 Öster had their first chance ever to qualify for Allsvenskan but ended up in last place in the four team promotion playoffs. Success in the promotion playoffs would instead come six years later in 1967 when they beat IK Brage in the deciding game in front of a home crowd of 26,404 people. Öster defied the odds during their first season in the top division and won the league on goal difference after a total of four teams had ended the season on exactly the same number of points. Following their championship title the club had ten years of solid Allsvenskan finishes before becoming dominant in the late-1970s and early-1980s where they won the league three times in four years.

After that successful era followed a slow decline over the next couple of decades which culminated in their relegation to the second tier in 1998. After that the club has found it hard to reestablish itself in Allsvenskan and has only made short one year appearances. Myresjöhus Arena is a football stadium in Växjö, Sweden and the home of Superettan club Östers IF. The stadium is a part of a large redevelopment of the area formerly known as Värendsvallen into Arenastaden, which also includes a new ice hockey arena, floorball arena and a dedicated indoor athletics arena.

History
On March 29, 2011 it was announced that the house builder Myresjöhus had purchased the naming rights to the stadium for an undisclosed amount. Myresjöhus Arena is a dedicated football stadium with a capacity of 12,000 (10,000 seated), with the entire audience under roof. The stadium conforms to UEFA category 3 for international games as well as Svenska Fotbollförbundets upcoming demands for stadiums in Allsvenskan. The official groundbreaking took place on March 31, 2011 and was led by Lars-Åke Lagrell, chairman of Svenska Fotbollförbundet. The first competitive football match at the stadium was played on 3 September 2012 between Småland rivals Östers IF and IFK Värnamo.