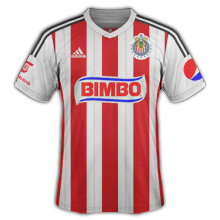 Club Deportivo Guadalajara S.A. de C.V. (often simply known as Guadalajara or Chivas, is a Mexican professional football club based in Guadalajara, Jalisco. Guadalajara is one of the ten founding members of the Mexican First Division and is one of only two teams that have never been relegated to the second-tier division.

Guadalajara is the only football club in Mexico that doesn't allow foreign players to play in their club. The team has constantly emphasized home-grown (cantera) players and has been the launching pad of many internationally successful players, including Omar Bravo, Javier Hernández, Carlos Salcido, Carlos Salcedo, Francisco Javier Rodríguez, and Marco Fabián. The team's three colors (red, white, and blue) symbolize "Fraternity, Union, and Sports". The founders of the team adopted the colors that linked them back to their home country, France. Chivas supporters use a flag identical to the French flag to support their team. The team mascot, as well as their nickname, is the goat or chiva. Chivas was one Mexico's most successful teams and holds the Mexican league record for the longest winning streak at the beginning of a season, with 8 consecutive wins. Internationally, Guadalajara is the best Mexican side to compete in Copa Libertadores having reached the semifinals twice (2005 and 2006) and being runner-ups in the 2010 edition.

According to a study of preferred football clubs published in April 2016 by Euroamericas Sport Marketing Spain, Guadalajara is the most popular team in Mexico, with 44.2% of supporters in the country. The Estadio Akron, formerly known as the Estadio Omnilife and Estadio Chivas, is a multipurpose stadium that is used mostly for football matches, including home matches for Club Deportivo Guadalajara, commonly known as the "Chivas". It is part of the JVC complex, and has a capacity of 49,850. Construction started in February 2004, but due to financial problems and other issues, the stadium's completion was delayed for a number of years.

The stadium hosted its first major international event with the first leg of the 2010 Finals of the Copa Libertadores, and hosted the 2011 Pan American Games opening and closing ceremonies. The stadium's artificial field caused great controversy, drawing criticism from many notable players, and in May 2012, it was announced that the stadium would replace the artificial turf with natural grass.