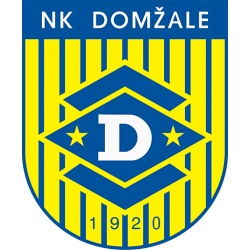 Nogometni Klub Domžale (English: Domžale Football Club), commonly referred to as NK Domžale or simply Domžale, is a Slovenian football club that plays in the town of Domžale. They have won both the Slovenian League and the Slovenian Cup twice.
NK Domžale was founded in 1920 under the name SK Disk.
The club's golden age began in summer of 2002, when Slaviša Stojanovič became a head coach. He brought Domžale into the 1. SNL. In the 2005–06 season, they advanced through the first two qualifying rounds of the UEFA Cup before being eliminated in the First Round by VfB Stuttgart. They played in the 2006–07 qualifying rounds, but were eliminated by Hapoel Tel Aviv. After a 4–0 away win against Primorje on 13 May 2007, Domžale were confirmed as league champions for the first time. They have won another league title in the 2007–08 season.

Domžale Sports Park (Slovene: Športni park Domžale) or Domžale Stadium (Slovene: Stadion Domžale) is a multi-purpose stadium in Domžale, Slovenia. It is currently used mostly for football matches and is the home ground of NK Domžale. The stadium, which was built in 1948, currently holds 3,100 spectators. The stadium was renovated and modernized in 1997 and 1999. Work on the new western stand started in October 2003 and was finished in April 2004. In June 2006 the stadium received floodlights, mounted on four concrete towers and placed at each corner of the stadium.