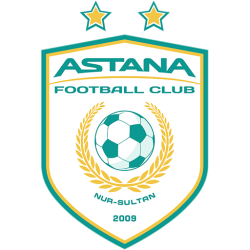 Nicknames
The Blue and Yellows[1]

Astana Football Club (Kazakh: Astana Fýtbol Klýby) is a professional football club based in Nur-Sultan. They play in the Kazakhstan Premier League, the highest level of Kazakh football. The club's home ground is the 30,254-seat Astana Arena stadium. The club colours, reflected in their badge and kit, are sky blue and yellow. Founded as Lokomotiv Astana in 2009, the club changed its name to Astana in 2011. They are members of the Astana Presidential Club, an association of the main sports teams in Astana supported by the Sovereign Wealth Fund Samruk-Kazyna.

The short history of the club already boasts five league titles, three Kazakhstan Cups and three Kazakhstan Super Cups. The club's strongest rivalry is with Kairat, among fans their matches are known as the Two Capitals Derby.

The Astana Arena (Kazakh: Астана Арена) is a football stadium in Nur-Sultan (formerly Astana), Kazakhstan. The stadium holds 30,000 and has a retractable roof. It serves as the national stadium for the Kazakhstan national football team. Astana Arena is the second largest stadium in the country and it was built from 2006 to 2009 at a cost of $185 million, and was officially opened on 3 July 2009. It is also a home ground for FC Astana of the Kazakhstan Premier League and FC Bayterek of the Kazakhstan First Division. The stadium hosted the opening ceremony of the 7th Asian Winter Games on 31 January 2011. Astana Arena was one of the venues to bid to host UEFA Euro 2020 matches.