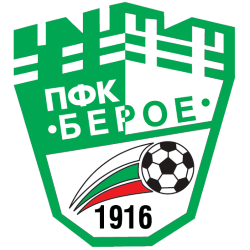 Beroe (Bulgarian: Берое) is a Bulgarian professional association football club based in Stara Zagora, that competes in the First League, the top division of the Bulgarian football league system. The club was founded in 1916 under the name Vereya. The club's colours are green and white.

Since then the home ground of Beroe has been the homonymous Beroe Stadium in Stara Zagora with a seating capacity of 12,128. Beroe were the 1986 champions of Bulgaria and they also won the Bulgarian Cup twice in 2010 and 2013. In terms of international achievements, Beroe hold the record for Balkans Cups titles, having won the tournament four times. The club's most noted and successful player is Petko Petkov, 2 times A Group Top Scorer: 1974 (with 20 goals) and 1976 (with 19 goals).

Stadion Beroe (Bulgarian: Стадион „Бeрое“, English: 'Beroe Stadium') (also nicknamed The Temple) is a multi-purpose stadium in Stara Zagora, Bulgaria. It is located in the north-western part of the city, near the park Ayazmoto. Currently, the venue is used for football matches and athletic competitions and is also the home ground of the local football club PFC Beroe Stara Zagora. The stadium has a seating capacity of 12,128 spectators and it was officially inaugurated on April 4, 1959.