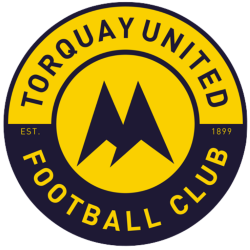 Torquay United Football Club is a professional association football club based in Torquay, Devon, England. The team compete in the National League, English football's fifth tier. They have played their home matches at Plainmoor since 1921 and are nicknamed "The Gulls".

Founded in 1899, the club first entered the East Devon League. They went on to win the Torquay & District League in 1908–09, the Plymouth & West Devon League 1911–12, and were admitted into the Football League in 1927 after claiming the Southern League title and second-place in the Western League in 1926–27. They remained in the Third Division South for the next 31 years and were promoted out of the Fourth Division at the end of the 1959–60 season, though were relegated after two seasons in the Third Division. Torquay were again promoted in 1965–66, only to suffer another relegation six years later. They survived re-election votes after last place finishes in the Fourth Division in 1985 and 1986.

Torquay gained promotion after winning the Fourth Division play-offs in 1991, having been losing finalists in 1988. Relegated in 1992, they lost another play-off final in 1998, before securing automatic promotion in 2003–04. They lasted just one season in League One and were relegated out of the Football League after finishing bottom of League Two in 2007. Torquay lost the 2008 FA Trophy final, but won the 2009 Conference play-off final. They spent five seasons in League Two, missing out in the play-offs in 2011 and 2012, before losing their Football League status for a second time with a last place finish in 2014. Torquay were relegated from the National League in 2018, but secured immediate promotion after winning the National League South in 2018–19.