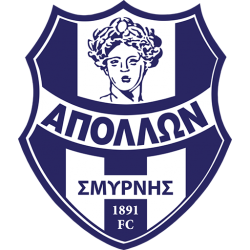 Apollon Smyrnis Football Club (Greek: ΠΑΕ Απόλλων Σμύρνης), or in its full name Gymnasticos Syllogos Apollon Smyrnis (Greek: Γυμναστικός Σύλλογος Απόλλων Σμύρνης, Gymnastics Society Apollon of Smyrna) is a Greek professional football club based in Rizoupoli in the city of Athens, that plays in the Super League. It was founded in İzmir in 1891 and is one of the oldest sports clubs in Greece.

Apollon Smyrnis has departments in football, basketball, volleyball, water polo and other sports.

Georgios Kamaras Stadium is a multi-purpose stadium in Athens, Greece. It is currently used mostly for football matches and is the home stadium of Apollon Smyrnis. The stadium holds 14,856 and was built in 1948. It was used by Olympiacos for about 2 years (2002–2004) as home ground, due to the construction of their new stadium Karaiskaki. Since 2005. the stadium is named Georgios Kamaras, in honour of Georgios Kamaras, old glorious player of Apollon.