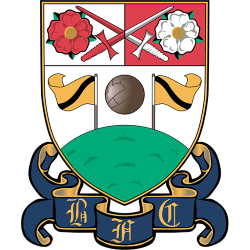 Barnet Football Club /ˈbɑːrnɪt/ is an English professional football club based in Edgware, north-west London. The club currently participates in the National League, the fifth tier of English football.

The club was founded in Chipping Barnet, then part of Hertfordshire, in 1888. They played their home matches at Underhill Stadium from 1907 until 2013, when they moved to the new Hive Stadium in Edgware.

The club also competes in the Middlesex Senior Cup. Before moving to the Hive, they competed in the Herts Senior Cup, of which they are the most successful team with 19 titles. The Hive Stadium is a 5,176 (official) capacity stadium in Canons Park, in the London Borough of Harrow on the former site of the Prince Edward Playing Fields, the new home for Football League Two football club Barnet and Championship rugby league club London Broncos. The stadium is also home to London Bees of the FA WSL, the ladies' team of Barnet F.C..

The record attendance at the stadium is 5,233 supporters (57 above official capacity, as terrace capacity restriction was relaxed for this game), for Barnet F.C.'s home game against Gateshead on 25 April 2015, when Barnet won promotion to League Two with a 2-0 win.