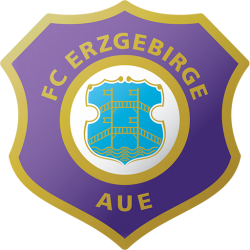 Fußball Club Erzgebirge Aue e.V., commonly known as simply FC Erzgebirge Aue or Erzgebirge Aue, is a German football club based in Aue, Saxony. The former East German side was a founder member of the 3. Liga in 2008–09, after being relegated from the 2. Bundesliga in 2007–08. The city of Aue has a population of about 18,000, making it one of the smallest cities to ever host a club playing at the second highest level of German football. However, the team attracts supporters from a larger urban area that includes Chemnitz and Zwickau, whose own football sides are among Aue's traditional rivals.

The Sparkassen-Erzgebirgsstadion (Sparkassen-Ore Mountains Stadium) is a multi-purpose stadium in Aue, Germany. It is currently used mostly for football matches and is the home stadium of FC Erzgebirge Aue. The stadium is able to hold 15,690 people and was built in 1950.