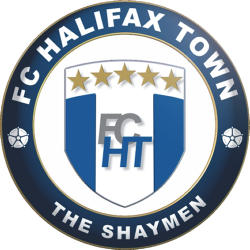 F.C. Halifax Town is a semi-professional association football club based in Halifax, West Yorkshire, England. The club participates in the National League, the fifth tier of English football. They replaced Halifax Town A.F.C., which went into administration in the 2007–08 season.

Huge tax debts buried Halifax Town A.F.C. after almost 100 years as a football club. New figures put to a reconvened creditors meeting in May 2008 showed the cash-strapped Shaymen owed over £800,000 to Her Majesty's Revenue and Customs. The Revenue refused any deal and that effectively finished the club – already over £2 million in the red. Administrators had been trying to broker a rescue package but speaking after five hours of talks that left liquidation near inevitable, administrator Rob Sadler said: "Halifax Town will probably perish." It was originally thought the club owed the taxman around £500,000, which might have left scope for a deal. But the news that it owed £814,000 meant that even if all the other creditors had accepted the 2.5p-in-the-pound offer originally on the table it would not have been enough.

At a meeting of the Football Association, discussing the makeup of the football pyramid for the 2008–09 season, FC Halifax Town were not placed in either the Conference Premier, the Conference North or the Northern Premier League Premier Division. Halifax appealed against the decision to remove them from the Football Conference. Though the appeal was rejected on 11 June, the hope was that Halifax could play in the NPL Premier Division. This did not materialise, and eventually Halifax Town were accepted to play in the Northern Premier League Division One North in the new season under the new name F.C. Halifax Town.

The Shay (known as the MBi Shay due to sponsorship) is a sports stadium in Halifax, West Yorkshire, England. Halifax Town football and Halifax rugby league clubs both play home games at the Shay.

The stadium is owned by Calderdale Metropolitan Council and leased by the Shay Stadium Trust, a not-for-profit company set up to preserve the ground as a sports stadium.

The Shay lies on the south side of Halifax, about a quarter of a mile from the town centre. The four stands at the Shay are the North Stand, the East Stand, the South Stand and the Skircoat Stand. The North and South stands were built in the mid-1990s. The Skircoat Stand is the oldest stand at the Shay.