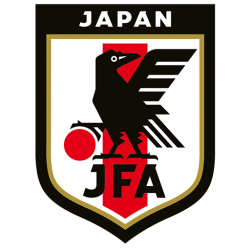 The Japan national football team (Japanese: サッカー日本代表, Hepburn: Sakkā Nippon Daihyō), nicknamed the Samurai Blue (サムライ・ブルー), represents Japan in men's international football and it is controlled by the Japan Football Association (JFA), the governing body for football in Japan. The current head coach is Hajime Moriyasu, who is also the current coach of the Japan U-23 team.

Japan was not a major football force until the end of the 1980s, with its team small and amateur, but since the 1990s, when Japanese football became fully professionalized, Japan has quickly emerged as one of the most successful teams in Asia, having qualified for the last six consecutive FIFA World Cups with second round advancements in 2002, 2010, and 2018, and having won the AFC Asian Cup a record four times, in 1992, 2000, 2004 and 2011. The team has also finished second in the 2001 FIFA Confederations Cup and the 2019 AFC Asian Cup. Japan's incredible transformation from an amateur football team to become a fully professional and Asian powerhouse in just a short amount of time has served as an inspiration and example of how to develop football.

Their principal continental rivals are South Korea, North Korea, China and most recently, Australia; though they also develop rivalries against Iran, Iraq and Saudi Arabia.