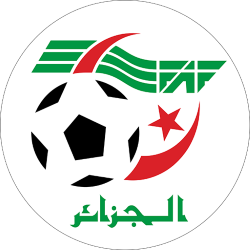 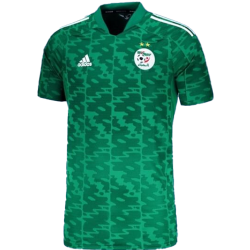 The Algeria national football team (Arabic: منتخب الجزائر لكرة القدم‎) represents Algeria in men's international football and it is governed by the Algerian Football Federation. The team plays their home matches at the Mustapha Tchaker Stadium in Blida and Stade du 5 Juillet in Algiers. Algeria joined FIFA on 1 January 1964, a year and a half after gaining independence. The team is a member of the FIFA and Confederation of African Football (CAF).

The North African team has qualified for four World Cups in 1982, 1986, 2010 and 2014. Algeria has won the African Cup of Nations twice, once in 1990, when they hosted the tournament, and again in Egypt in 2019. At the 2014 World Cup in Brazil, Algeria became the first African team to score four goals in a match at the World Cup, against South Korea.

The traditional rivals of Algeria are mainly Morocco, Tunisia and Egypt, Algeria has also had very competitive matches against Nigeria, especially in the 1980s during Algeria's best football generation, against Mali due to sharing common border and a long-standing competitive rivalry, and against Senegal, where Algeria's first global success began. For the Algerians, their biggest victory was their 2–1 win against West Germany during the 1982 FIFA World Cup in which the African nation shocked the world. Algeria has produced many talented players throughout time and is considered one of the best teams in African Football history. The Algerian National Football Team have traditionally played their home games at the 5 July Stadium, However, since 2009 The team has played most of its home games at the Mustapha Tchaker Stadium and recently in Hamlaoui Stadium in constantine . There are many new stadiums being built in Algeria, two of which are expected to be the home venue for the team, the first being the forty thousand capacity Baraki Stadium being built in Algiers, the other one is Olympic Stadium in Oran. Another Stadium currently under construction, where the National team is expected to play some of its scheduled friendly games is in the Stade Abdelkader Khalef in the city of Tizi Ouzou.