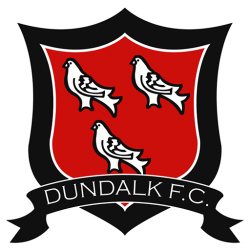 Nicknames
The Lilywhites, The Town

Dundalk Football Club (Irish: Cumann Peile Dhún Dealgan) is a professional association football club in Dundalk, Ireland. Dundalk compete in the League of Ireland Premier Division, the top tier of Irish football, and are the League Champions and League of Ireland Cup holders, having won both in 2019. Founded in 1903 as the works-team of the Great Northern Railway company, they played in junior competition until they joined the Leinster Senior League in 1922. After four seasons in that division, they were elected to the Free State League, which later became the League of Ireland, in 1926.

In 1932–33 they became the first club from outside Dublin to win the league title, and have won at least one league title or FAI Cup in every decade since. They are now the second most successful club in the League's history, and the most successful in the Premier Division era. In 1936 they moved from their original home at the Athletic Grounds in the town centre to their present ground, Oriel Park. The team has played in white shirts since 1928, and adopted the present colours of white shirts with black shorts in 1940. The club's crest was also adopted in 1928 and is based on the town's old Corporation Arms.

Dundalk made their European debut as League Champions in the 1963–64 European Cup, and became the first Irish side to win an away match in Europe the same season. In the 1979–80 European Cup they reached the last 16, which was their best European performance until 2016. That season they reached the group stage of the 2016–17 Europa League, and became the first team from Ireland to both win points and win a match at that level of European competition. They have qualified for Europe a total of 24 times and are now the highest ranked Irish side as measured by UEFA club coefficients.

Oriel Park is a multi-purpose stadium in Dundalk, County Louth, Ireland. It is used mostly for football matches and is the home stadium of Dundalk F.C. Its current capacity is about 4,500 with 3,000 seats. The ground was opened in 1919.