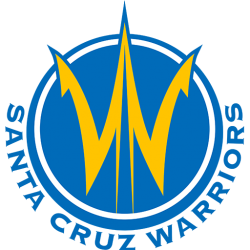 The Santa Cruz Warriors are an American professional basketball team in the NBA G League, based in Santa Cruz, California. The team's one-to-one NBA affiliate is the Golden State Warriors, and they play their home games at the Kaiser Permanente Arena. Prior to the move to Santa Cruz for the 2012–13 season, the team was known as the Dakota Wizards. In 2014–15, the Warriors won their first D-League championship since 2007.

Kaiser Permanente Arena is an indoor arena located in Santa Cruz, in the U.S. state of California. It has a seating capacity of 2,505 spectators. It hosts the Santa Cruz Warriors of the NBA Development League. It also is the new home of the Santa Cruz Derby Girls of the Women's Flat Track Derby Association. The naming rights were bought by health care consortium Kaiser Permanente despite the company - sponsor of the Warriors' owner, the NBA's Golden State Warriors - not having facilities in Santa Cruz.

A $3.5 million loan by the city of Santa Cruz was given to the Warriors to build their arena, with the 1.5-acre lot being provided by the Santa Cruz Seaside Company, owner of the Santa Cruz Beach Boardwalk. Construction ran for 78 days between September and December 2012, halted just a few times by rain. The arena was opened in December 23, 2012, with a victory of the Warriors against the Bakersfield Jam. By April 2014, Kaiser Permanente Arena had 39 sell outs out of the 53 Warriors home games. In the meantime, the Warriors reached two D-League finals.

The arena also serves as the home of UC Santa Cruz men's and women's basketball games.