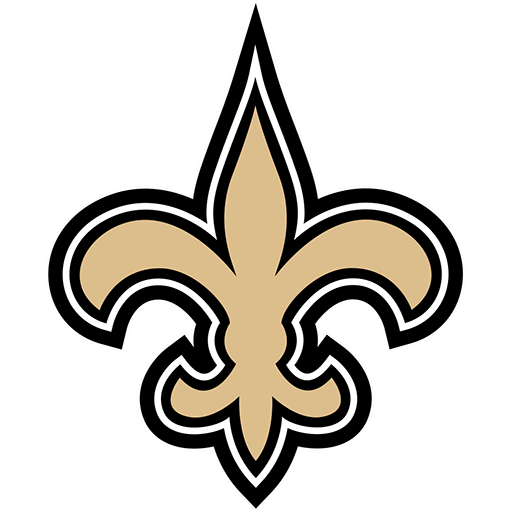 The name "Saints" is an allusion to November 1 being All Saints Day in the Catholic faith, New Orleans' large Catholic population, and the spiritual "When the Saints Go Marching In", which is strongly associated with New Orleans and often sung by fans at games. The franchise was founded on November 1, 1966. The team's primary colors are old gold and black; their logo is a simplified fleur-de-lis. They played their home games in Tulane Stadium through the 1974 NFL season. The following year, they moved to the new Louisiana Superdome (now the Mercedes-Benz Superdome, since Mercedes-Benz has purchased the stadium's naming rights).

For most of their first 20 years, the Saints were barely competitive, only getting to .500 twice. In 1987, they finished 12–3—their first-ever winning season—and qualified for the NFL playoffs for the first time in franchise history, but lost to the Minnesota Vikings 44–10. The next season of 1988 ended with a 10–6 record, but no playoff berth. In the 2000 season, the Saints defeated the defending Super Bowl champion St. Louis Rams 31–28 to notch their first-ever playoff win.

In 2005, Hurricane Katrina devastated New Orleans and much of the Gulf Coast region. The Superdome was used as an emergency temporary shelter for displaced residents. The stadium suffered damage from the hurricane (notably from flooding and part of the roof being torn off as well as internal damage), and from lack of available facilities. The Saints were forced to play their first scheduled home game against the New York Giants at Giants Stadium in East Rutherford, New Jersey (the Giants' home stadium); other home games were rescheduled at the Alamodome in San Antonio, Texas or Tiger Stadium in Baton Rouge, Louisiana. During the season, it was rumored that Saints owner Tom Benson might deem the Superdome unusable and seek to legally void his contract and relocate the team to San Antonio, where he has business interests. Ultimately, however, the Superdome was repaired and renovated in time for the 2006 season at an estimated cost of US$185 million. The New Orleans Saints' first post-Katrina home game was an emotionally charged Monday Night Football game versus their division rival, the Atlanta Falcons. The Saints, under rookie head coach Sean Payton and new quarterback Drew Brees, defeated the Falcons 23–3, and went on to notch the second playoff win in franchise history. The Mercedes-Benz Superdome, often referred to simply as the Superdome, is a domed sports and exhibition venue located in the Central Business District of New Orleans, Louisiana, United States. It primarily serves as the home venue for the New Orleans Saints of the National Football League (NFL), and is also the home stadium for the Sugar Bowl and New Orleans Bowl in college football. Plans were drawn up in 1967 by the New Orleans modernist architectural firm of Curtis and Davis and the building opened as the Louisiana Superdome in 1975. Its steel frame covers a 13-acre (5.3 ha) expanse and the 273-foot (83 m) dome is made of a lamellar multi-ringed frame and has a diameter of 680 feet (210 m), making it the largest fixed domed structure in the world. It is adjacent to the Smoothie King Center.

Because of the building's size and location in one of the major tourist destinations of the United States, the Superdome routinely hosts major sporting events, including the Super Bowl, College Football Championship Game, and the Final Four in college basketball. The stadium was also the long-time home of the Tulane Green Wave football team of Tulane University until 2013 (when they returned on-campus at Yulman Stadium) and was the home venue of the New Orleans Jazz of the National Basketball Association (NBA) from 1975 until 1979.

The Superdome gained international attention of a different type in 2005 when it housed thousands of people seeking shelter from Hurricane Katrina. The building suffered extensive damage as a result of the storm, and was closed for many months afterward. It was eventually decided the building would be fully refurbished and reopened in time for the Saints' 2006 home opener on September 25.