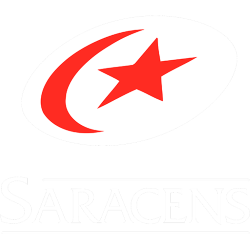 Saracens Football Club are an English professional rugby union club based in London, England. They play in the RFU Championship, the second tier of rugby in England.
Established in 1876, they were the champions of the European Rugby Champions Cup, which they won twice consecutively, in 2016 and 2017. Since 2012, Saracens have played their home games at Allianz Park in Hendon, in the London Borough of Barnet; previous grounds have included Vicarage Road in Watford, and Bramley Road. The club's home playing colours are black and red.

Barnet Copthall is a leisure complex in Hendon, London NW4, near the border with Mill Hill. At its centre is a stadium known for sponsorship reasons as Allianz Park, the home ground of rugby union Premiership side Saracens since February 2013.

Today, the complex houses a local authority-owned swimming pool and gymnasium facilities next to the new Allianz Stadium which is primarily used for Rugby and Athletics. It is also used by some local schools for sports training sessions. There is also a private golf driving range on the site.

To arrive through public transport to Barnet Copthall (Allianz Park) the nearest tube & rail station is Mill Hill East tube station which is on the Northern Line. On matchdays a Saracens Shuttle Bus runs from Edgware Tube Station, Mill Hill East Tube Station and Mill Hill Broadway Train Station to within a walking distance away from the stadium. A regular bus service, the 221 stops at the same bus stop near the stadium (Pursley Road).