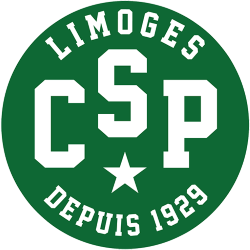 Limoges Cercle Saint-Pierre, commonly referred to as Limoges CSP, is a French professional basketball club that is based in the city of Limoges. They currently participate in the LNB Pro A.

Palais de Sports de Beaublanc is an indoor sporting arena located in Limoges, France. The capacity of the arena is for 6,500 people and it was opened in the summer of 1981. It is currently home to the Limoges CSP basketball team.

The Palais des Sports Beaublanc (Bosc White in Occitan) is located in the sports park of the city of Limoges. It was made in 1981 thanks to Mr Xavier Popelier and Mr Albert Chaminade with a mandate from the French Basketball Albert Chaminade working together his project asked the Mayor Louis Longequeue it can confirm to cover the Sports Palace with this wave form that gives it to other rooms and hosts a style from the club Basketball CSP Limoges, but also various sporting events (Davis Cup, Fed Cup tennis, basketball matches and female handball).

Until 2007 and the opening of Limoges Concert Hall, he welcomed most major concerts.

Its shape is very characteristic, in particular oak roof.