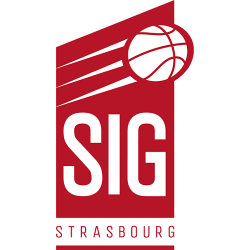 Strasbourg Illkirch-Graffenstaden Basket, most commonly known as SIG or simply Strasbourg, is a French professional basketball club that is based in Strasbourg. The club, founded in 1929, competes domestically in the French Pro A League, and internationally in the Eurocup. The club's home games are played at Rhenus Sport. The players wear white and red uniforms.

Rhénus Sport is a multi-purpose arena located in Strasbourg, France. The seating capacity is 6,200 people for basketball games. It is currently home to the professional French League club Strasbourg IG.

In 1981, the arena was the venue of the European Champions Cup Final, in which Maccabi Tel Aviv defeated Synudine Bologna 80-79. In February 2006, the Davis Cup match between France and Sweden took place in this arena.

On April 3, 2009, USA President Barack Obama spoke to a French and German crowd at the arena, while the President was in Stasbourg for the 2009 Strasbourg-Kehl summit.