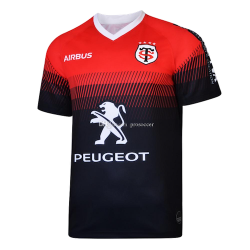 Stade Toulousain (French pronunciation: ​) (In Occitan: Estadi Tolosenc), also referred to as Toulouse, is a French rugby union club from Toulouse in Midi-Pyrénées. Toulouse is arguably one of the finest rugby clubs in Europe, having won the Heineken Cup a record four times – in 1996, 2003, 2005 and 2010. They were also runners-up in 2004 and 2008 against London Wasps and Munster, respectively. Stade Toulousain have also won a record 19 French Championship titles. It is traditionally one of the main providers for the French national team. Their home ground is the Stade Ernest-Wallon. However, big Top 14 matches along with Heineken Cup games are often played at the Stadium Municipal de Toulouse. The club colours are red, black and white. Stade Ernest-Wallon (usually called "stade des Sept Deniers") is a multi-purpose stadium in Toulouse, France. It is currently the home of rugby union team Stade Toulousain. The stadium was built in the late 1980s and was recently renovated. It has a capacity of 19,500. The stadium however is not always suitable for big games. For the larger fixtures, such as championships play-offs or Heineken Cup games, the fixture may be moved to Stadium Municipal, which has nearly double the capacity.

The Stade Ernest-Wallon was used to host the rugby league international fixture between France and England, in which England defeated France 56-8. The stadium once again hosted rugby league on 31 October 2009, seeing a 2009 Gillette Four Nations game between France and New Zealand, resulting in a 62-12 win for the Kiwis. It also hosted the French Super League side Catalans Dragons, as part of their initiative to expand club rugby league in France, in 2013: a sellout crowd, many of whom carried banners supporting local side Toulouse Olympique's bid to enter the Super League, saw the Dragons lose 22-21 to Hull Kingston Rovers.