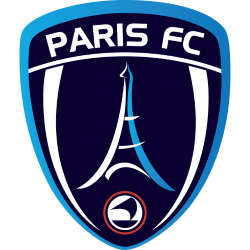 Paris Football Club (commonly referred to as PFC) is a French association football club based in Paris. The club was founded in 1969 and competes in Ligue 2, the second level of French football. Paris plays its home matches at the Stade Charléty located in the 13th arrondissement of Paris. The team is managed by Denis Renaud and captained by defender Thomas Veldemann.

Paris FC was founded in 1969 and later merged with Stade Saint-Germain to form Paris Saint-Germain. The current Paris FC exists as a result of the club splitting from Paris Saint-Germain. Unlike its counterpart, which has gone on to establish a solid foundation, Paris FC has struggled to establish itself, having spent the majority of its existence playing in the amateur divisions. The club's highest honour to date was winning its group in the Championnat de France amateur in 2006. Paris FC last played in Ligue 1 in the 1978–79 season.

Though Paris FC have struggled domestically, the club has served as a springboard for several youth players who have gone on to have successful professional careers. Notable players who started their careers at PFC include Jean-Christophe Thouvenel, Mamadou Sakho, Tijani Belaid, Aymen Belaïd, and Gabriel Obertan. Sakho and the Belaïd brothers have since became senior internationals for their respective national teams, while Thouvenel went on to win a gold medal at the 1984 Summer Olympics. Manager Roger Lemerre started his managerial career with the club before leading France to titles at UEFA Euro 2000 and the 2001 FIFA Confederations Cup.

Stade Sebastien Charléty, known simply as Stade Charléty or just Charléty, is a multi-use stadium in the 13th arrondissement of Paris, France. Officially, the current capacity of the stadium is 20,000 people. The stadium opened in 1938 and was designed by French architect Bernard Zehrfuss. It has hosted many matches during various Rugby League World Cups and is the current home of Paris Saint-Germain Féminines who compete in the Division 1 Féminine and in the UEFA Women's Champions League. The stadium was serving as the temporary home for the Stade Français rugby union club, starting in 2010–11 and running through 2012–13, while that club was building a completely new stadium at the site of its traditional home, Stade Jean-Bouin. It also hosted Stade's home match in the Paris derby with Racing Métro in the 2009–10 season. Paris FC who compete in the Championnat National (the third tier of French football), used the stadium from 2007 to 2013.

There is an indoor sporting arena called Salle Pierre Charpy that is located under the stadium. The capacity of the arena is 1,850 people. It is currently the home arena of the French Pro A League professional volleyball team Paris Volley.

In May 1968, Charléty made the news for a nonsporting event: on 27 May, the meeting of the Union Nationale des Étudiants de France, one of the most important of the protests of that month, took place, attracting between 30,000 and 50,000 people. The crowd, led by Pierre Mendès-France and Michel Rocard, shouted "Ce n'est qu'un début, continuons le combat!" ("This is only the beginning; let's keep up the fight!")