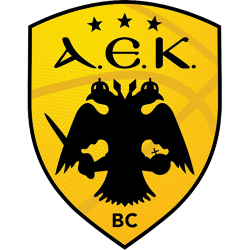 AEK BC vs Promitheas Patras BC (04 Dec)

A.E.K Basketball Club (Greek: Αθλητική Ένωσις Κωνσταντινουπόλεως, Athlitiki Enosis Constantinoupoleos, means Athletic Union of Constantinople), also known simply as AEK BC (Greek: Α.Ε.Κ. Κ.Α.Ε.) or AEK, known in European competitions as AEK Athens, is a Greek professional sports basketball club based in Athens, Greece, part of the major multi-sport club A.E.K.. The club was established in Athens in 1924 by Greek refugees from Constantinople in the wake of the Greco-Turkish War (1919–1922).

They are one of the most popular Greek clubs, with millions of fans in both Greece and Cyprus, as well as in the Greek communities all over the world, mainly in Australia, the United Kingdom, and North America.

AEK B.C. has been named as the best Greek team in all sports, at either the sports club or national team level, on three separate occasions, in 1965, 1966, and 1968, by SJA of Greece (the Sports Journalists' Association of Greece, Greek: ΠΣΑΤ). The Nikos Galis Olympic Indoor Hall (previously known as O.A.C.A. Olympic Indoor Hall), which is a part of the Olympic Athletic Center of Athens (O.A.C.A.) "Spiros Louis" (Greek: O.A.K.A.), was completed in 1995, and was the largest indoor venue in use for sporting events at the 2004 Summer Olympics in Athens, Greece. It is located in the Athens suburb of Marousi. It is considered to be one of the biggest and most modern indoor sports arenas in all of Europe.