The Brisbane Lions are an Australian rules football club which plays in the Australian Football League (AFL). The club is based in Brisbane, Queensland. The club was formed in 1996 from the merger of the Fitzroy Lions and the Brisbane Bears. The Lions are one of the most successful AFL clubs of the 21st century, having appeared in four consecutive AFL Grand Finals from 2001 to 2004 and winning three premierships (2001, 2002 and 2003). The Brisbane Cricket Ground, commonly known as the Gabba, is a major sports stadium in Brisbane, the capital of Queensland. It is named after the suburb of Woolloongabba, in which it is located.

The land on which the ground sits was first set aside for use as a cricket ground in 1895 and the first cricket match was held on the site on 19 December 1896, between Parliament and The Press. Prior to this, cricket was played at the cricket ground located in the area then known as 'Green Hills' (then located beside Countess Street Petrie Terrace opposite the Victoria Barracks – now occupied by the Northern Busway), since at least the early 1860s. 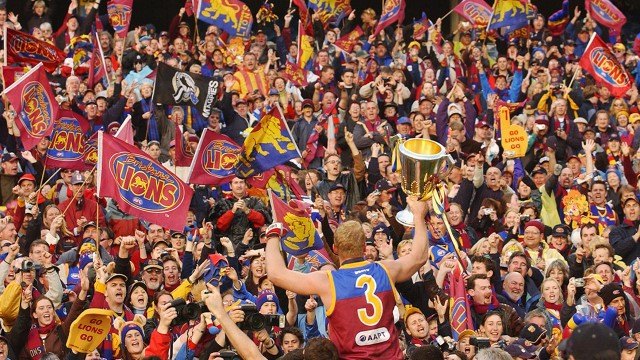