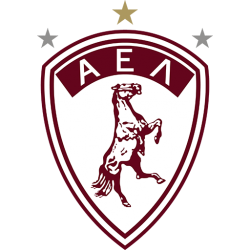 Founded in 1964, it is directly associated with the city of Larissa and its representation. The club's emblem, is a rising horse and its colors are crimson and white. It is the only team outside the two major Greek cities (Athens and Thessaloniki) to have won the Greek Championship in the season 1987–88. AEL has also won twice the Greek Cup (1984–85 and 2006–07) and played in additional in two Cup finals (1982 and 1984). This record places the club among the top teams in the history of Greek football.

They play their home games at AEL FC Arena, a newly built stadium (2010) with a capacity of 16,118 seats. The team currently competes in the Greek Super League, the first division of national football championships. The stadium was developed in a total of 144,000 square meters in the Mezourlo Hill, district of Neapolis, Larissa. Construction of the stadium started in September 2009 and was completed in November 2010. According to UEFA stadium categories, AEL FC Arena, is rated as category three of four, (renamed from elite) in ascending ranking order.

The seating capacity is 16,118 all covered, with the possibility to expand to 18,000. It also includes 38 VIP boxes, for 12 spectators each. The stadium complex, called Crimson Park, includes parking lots for 1,104 vehicles, commercial spaces, a movie theater, and a 1,500-seat open-air theater, 12 tennis courts and lies near the Neapolis Indoor Hall. The new sports venue is ideally located - regarding the urban location - with a fair accession in the transport system and has good accessibility from two main motorways and proximity to the city's center.

The stadium was inaugurated on 23 November, followed by a concert by Filippos Pliatsikas (himself a fan of the team) and Dionysis Tsaknis.