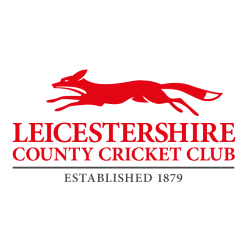 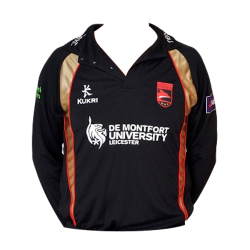 The club is based at Grace Road, Leicester and have also played home games at Aylestone Road in Leicester, at Hinckley, Loughborough, Melton Mowbray, Ashby-de-la-Zouch and in Coalville inside the traditional county boundaries; and at Uppingham and Oakham over the border in Rutland.

In limited overs cricket, the kit colours are red with black trim in the Clydesdale Bank 40 and black with red trim in the T20. The shirt sponsors are Oval Insurance Broking with Highcross Leicester (shopping centre) on the top reverse side of the shirt. Grace Road is a cricket ground in Leicester, England. It is the home ground and administrative base for Leicestershire County Cricket Club.

The land which Grace Road is built on was bought by Leicestershire County Cricket Club in 1877 from the then Duke of Rutland and spent the massive sum of £40,000 on developing a cricket club, athletic track and hotel. The first match played on the ground took place three months later, when Leicestershire beat the touring Australia team. Contrary to popular belief, the road was named after a local property owner, not W. G. Grace.

Leicestershire left the Grace Road site in 1901 due to lack of public transport to the ground causing low crowds. They moved to a site near to Aylestone Road, as it was closer to the city centre. Leicestershire did eventually return to Grace Road after the end of the Second World War in 1946 and have been based there ever since, buying the land back in 1966.

The record attendance is 16,000 who watched the match against the touring 1948 Australians.

In front of the wicket at both ends the pitch is measured at 56 metres, whilst square of the wicket on both sides the dimensions are recorded as 76 metres. This is larger than most county grounds, but smaller than some of England's major international venues such as The Oval.