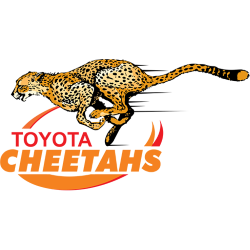 The Cheetahs, known for sponsorship reasons as the Toyota Cheetahs, is a South African rugby union team that played Super Rugby between 2006 and 2017, before joining the Pro14 competition prior to the 2017–18 season. They are based at the Free State Stadium in Bloemfontein.

The Cheetahs was one of the two new franchises that entered the expanded Super 14 competition in 2006, the other being Australia's Western Force. The Central Union was awarded the fifth South African franchise over the SEC franchise in April 2005. In its first season the Cheetahs did surprisingly well, finishing tenth in the final standings, out of 14 sides. Prior to being accepted into the 2006 Super 14 season, the Cheetahs areas were represented as a part of the Cats franchise. In addition, before South Africa entered franchises into the Super 14, the Free State Currie Cup side competed in the 1997 Super 12 season.