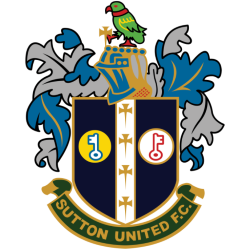 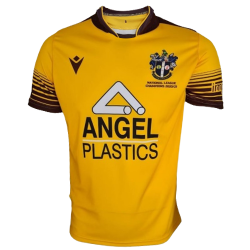 Sutton United Football Club is a professional football club in Sutton, South London, England, who play in the National League, the fifth tier of English football. They will compete in the EFL League Two for the 2021–22 season, having been crowned National League champions in 2020–21. They play home games at Gander Green Lane, close to West Sutton Station. The club is an FA Charter Standard Community Club affiliated to the Surrey County Football Association.

The team has had several cup successes, including playing at Wembley in the FA Amateur Cup final twice and in the FA Trophy final in 1981. Sutton won the Anglo-Italian Cup in 1979, but the club is most famous for its FA Cup "giant killing" exploits, most notably in the 1988–89 season, when they defeated Coventry City 2–1 in the Third Round. The Coventry team was composed mostly of star international players and had won the competition in 1987. In the 2016–17 season, Sutton reached the Fifth Round of the FA Cup for the first time in their history, beating three Football League teams (Cheltenham Town, AFC Wimbledon and Leeds United) before losing 2–0 at home to Arsenal. Gander Green Lane, officially the Knights Community Stadium for sponsorship reasons, is a football stadium in the London Borough of Sutton, and the home ground of Sutton United. The record attendance for Gander Green Lane is 14,000 when Sutton United lost 6–0 to Leeds United in the fourth round of the 1969–70 FA Cup.

During the 19th century, the Gander Green Lane site was used as allotments and open fields. The ground was originally developed during the Edwardian period. A 1913 map shows the ground designated as a "Football Ground" with a small pavilion on the northern side of the pitch and a turnstile entrance in the north-western corner via the Collingwood Recreation Ground. The ground was bounded by trees on three sides with a large residential building, Strawberry Lodge (formerly Strawberry House), to the west. To the north and east is the recreation ground and to the south was a field and pit described as a "Brick Field", which was used as a local brickworks. By 1937, Strawberry Lodge had been demolished and replaced by terraced houses, the brick field replaced by the railway line through West Sutton, a second pavilion added to the northern side of the pitch and a further pavilion erected in the south-eastern corner. None of the original pavilions survive today.

Sutton United's first match at Gander Green Lane (then known as the Adult School Sports Ground) was in 1912 against Guards Depot F.C. in the FA Cup. The first league match was against Redhill and was won 1–0 in front of a crowd of over 800. Sutton left the ground at the end of the 1912–13 season as the ground became unavailable due to Sutton Adult School forming their own team. United returned to Gander Green Lane in August 1919.

The Main Stand (or Grandstand) was built in 1951, although it has been altered throughout the years. The stand's red and blue seats, which do not reflect the club's colours, were donated by Chelsea.

Access to the ground for most match day supporters continues to be through "Ellison's patent rush preventative turnstiles", which were manufactured by W.T. Ellison & Co of Salford, Lancashire between 1898 and 1963. Similar turnstiles were installed at the original Wembley Stadium in 1923.

In the 1980s, two small wooden stands were replaced by a covered standing terrace, known as the "Rec Terrace" because it is on the Collingwood Recreation Ground side of the pitch, on top of which is a covered television filming box used by SUFCtv. A small remnant of one of the original wooden stands is next to the Rec Terrace and is known by Sutton supporters as "the shoebox". Behind this there is a small food hut called "Rose's Tea Hut", named after a lady called Rose who ran the hut for over four decades.

On 7 January 1989, the Lane hosted an FA Cup match against top division Coventry City, which Sutton won to create one of the biggest upsets in FA Cup history, in front of a sell-out crowd of approximately 8,000 supporters.

In 1997, the Gander Green Lane end of the stadium was levelled off and new terracing was installed.

On 10 July 2002, the ground played host to AFC Wimbledon's first match following the relocation of Wimbledon F.C. to Milton Keynes. In a pre-season friendly, Sutton defeated the reformed Dons 4–0 in front of a notably large crowd of 4,657.

In addition to football, the ground was used in the past for athletics. To fix the effects of the terraces being further away from the pitch than usual, in 2014 the ground was refurbished: the athletics track was removed and new dugouts and player tunnels were built; to move some of the stands closer to the pitch, new covered standing terraces were built behind each goal on the eastern and western sides of the pitch. The oval curvature of the two open standing terraces which sweep around the western side of the pitch allude to the ground's former use for athletics.

On 22 April 2015, Sutton United announced that Sutton Common Rovers would be ground sharing Gander Green Lane from the start of the 2015–16 season. In the summer of 2015 a new artificial pitch was installed, and was officially opened on 14 July 2015 by Alan Pardew, former manager of Crystal Palace.

A mural to commemorate Craig Dundas' 400th appearance for the club in a 2–0 home win over Dartford on 23 January 2016 can be seen on the side of a terrace next to Rose's Tea Hut. It shows Dundas celebrating a goal with the number "400" in bold black letters.

Gander Green Lane was officially renamed the Knights Community Stadium in 2017 after the club agreed a 3-year sponsorship deal with the Knights Foundation, who in return will be running Sutton United's academy until 2020.

The record league match attendance for the ground is 3,198, which was set on 5 August 2017 in a 2-0 victory over Leyton Orient.

The main hall, currently known as the Times Square Lounge, is home to the Boom Boom Club music venue.