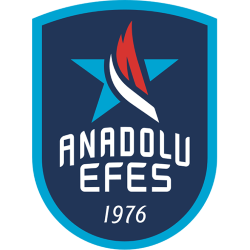 Anadolu Efes Spor Kulübü (English: Anadolu Efes Sports Club), formerly known as Efes Pilsen, is a Turkish professional basketball team that is based in Istanbul, Turkey. It is the most successful club in the history of the Turkish Super League (BSL), having won the league's championship 13 times.

The home arena of Anadolu Efes S.K. is the Sinan Erdem Dome, in Istanbul, which has a seating capacity of 16,000 for basketball games. The club has its own practice facility in the district of Bahçelievler, which was built in 1982. The team competes in the Turkish Super League and the EuroLeague. The club is owned by the Efes Beverage Group. The Sinan Erdem Dome (Turkish: Sinan Erdem Spor Salonu), formerly known as the Ataköy Dome, is a multi-purpose indoor arena that is located on the European side of Istanbul, Turkey.