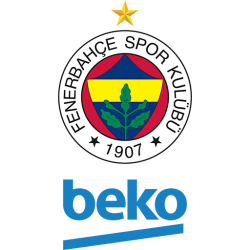 Fenerbahçe Men's Basketball Team (Turkish: Fenerbahçe Erkek Basketbol Takımı), for sponsorship reasons Fenerbahçe Doğuş, also known simply as Fenerbahçe, is a professional basketball team and the men's basketball department of Fenerbahçe SK, a major Turkish multi-sport club based in Istanbul, Turkey. They are one of the most successful clubs in Turkish basketball history, the only Turkish team to have won the EuroLeague, as well as eight Turkish Championships, five Turkish Cups, and seven Turkish Super Cups, amongst others. They play their home matches at the Ülker Sports Arena.

Besides the European championship title in 2017, which was secured by a convincing 80–64 win against Greek powerhouse Olympiacos in the final, Fenerbahçe have also been EuroLeague runners-up in 2016 and have played in three consecutive EuroLeague Final Fours (2015, 2016, 2017), a record in Turkish basketball.

Currently, Fenerbahçe are dominating the Turkish Super League, which is considered to be one of the best European national domestic basketball leagues. The club swept through the Turkish League playoffs in the 2016–17 season undefeated, beating rivals Beşiktaş in the finals, with a 4–0 series sweep. The team lost only two Turkish League matches in the whole season.

Since 2013 the coach of the team is Željko Obradović, who is considered to be the greatest European coach in basketball history. Fenerbahçe International Sports Complex Ülker Sports Arena (Turkish: Fenerbahçe Uluslararası Spor Kompleksi Ülker Spor Arena) is a multi-purpose indoor arena that is located in Ataşehir, Istanbul, Turkey. The arena is owned and operated by Fenerbahçe S.K. The arena has a capacity of 15,000 people for concerts and 13,059 for basketball games, and it has hosted national and international sports events, such as basketball, volleyball, wrestling, and weightlifting; as well as concerts and congresses.