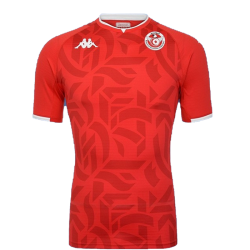 The Tunisia national football team (Arabic: منتخب تونس لكرة القدم‎), nicknamed Les Aigles de Carthage (The Eagles of Carthage or The Carthage Eagles), is the national team of Tunisia and is controlled by the Tunisian Football Federation. They have qualified for four FIFA World Cups, the first one in 1978, but have yet to make it out of the first round. Nevertheless, they created history in that 1978 tournament in Argentina by becoming the first African side to win a World Cup match, beating Mexico 3–1. They also held defending champions West Germany to a goalless draw before bowing out. They have since qualified for three tournaments in succession, in 1998, 2002, 2006, and have qualified for the 2018 finals.

Tunisia also won the 2004 Africa Cup of Nations, when they hosted the tournament.

Stade Olympique de Radès (Arabic: الملعب الأولمبي برادس‎) is a multi-purpose stadium in Rades, Tunisia about 10 kilometers south-east of the city center of Tunis, in the center of the Olympic City. It is currently used mostly for football matches and it also has facilities for athletics. The stadium holds 60,000 and was built in 2001 for the 2001 Mediterranean Games and is considered to be one of the best stadiums in Africa.