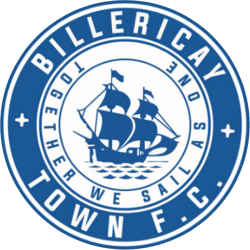 Billericay Town Football Club is a football club based in Billericay, Essex, England. The club are currently members of the National League South, the sixth tier of English football, and play at New Lodge. They are the second most successful club in FA Vase history, having won the competition on three occasions.

Archer Hall became the club's permanent home ground during the 1930s, although it remained an unenclosed pitch. In 1970 the club moved to New Lodge, which had previously been a sports ground used by Outwell Common Football Club. The ground was enclosed using a loan from Basildon Borough Council and Charrington Brewery and dressing rooms and a clubhouse were built. During the 1970s a covered standing area was built on the clubhouse side of the pitch, which became known as the Cowshed. Temporary seated stands loaned from Essex County Cricket Club were later installed on the other side of the pitch. In 1977 the club won a set of floodlights by winning the Philips Electrical Floodlight Competition final against Friar Lane Old Boys, a six-a-side tournament played at the Crystal Palace National Sports Centre the day after their FA Vase final against Sheffield. The floodlights were inaugurated with a friendly match against West Ham United, which attracted a then-record crowd of 3,841.

In 1980 a permanent 120-seat stand was built between the Cowshed and the clubhouse; its shape led to it becoming known as the Pacman stand. During the 1980s a 200-seat stand was built on the side that had previously hosted the temporary seating, with the supporters club erecting several small areas of terracing. In 1995 Billericay bought two stands that had been in use at Newbury Town's Faraday Road ground after the club went bust. One was installed next to the Cowshed and the other at the Blunts Wall End, with seats later installed in the Blunts Wall End stand. The new stand adjacent to the Cowshed was soon moved to the other end of the pitch. An area of covered terracing was added alongside the 200-seat stand. Chelmsford City groundshared at New Lodge between 1998 and 2005. In 2002 the club announced plans to move to a new 4,000-capacity stadium at Gloucester Park. However, the relocation was scrapped by new chairman Steve Kent in 2004. By the summer of 2017 the ground had a capacity of 3,500, of which 424 was seated and 2,000 was covered.

In the summer of 2017 New Lodge was completely redeveloped. Covered terraces were built at both ends of the ground covering the full width of the pitch; a new seated stand was built next to the clubhouse where the Pacman stand and Cowshed had previously been located, and was named the Harry Parker Stand. On the other side of the pitch the seating was extended to the full length of the pitch. The ground's capacity was raised to around 5,000 with 2,000 seated. A friendly match against West Ham on 8 August 2017 attracted a record crowd of 4,582.