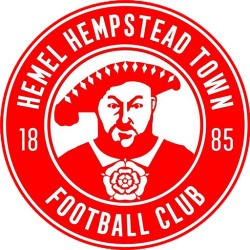 Hemel Hempstead Town Football Club is a semi-professional football club based in Hemel Hempstead, Hertfordshire, England. Affiliated to the Hertfordshire County Football Association, they are currently members of the National League South, the sixth tier of English football, and play at Vauxhall Road.

Apsley End initially played at Salmon Meadow in Apsley, which was named after 'The Salmon', a nearby pub that was also used as the changing rooms. After World War I the club moved to the Apsley Club & Institute, which featured a small stand. However, they were forced to leave at the end of the 1927–28 season due to an expansion of the adjacent mill. The club then played at Gee's Meadow in Bourne End for the 1928–29 season, with the stand from Salmon Meadow dismantled and brought to the new ground. In 1929 the club moved to Crabtree Lane. Located in the town centre, the ground had a large grandstand. The club's record attendance was set in January 1962 when 3,500 saw the team lose 3–1 to Tooting & Mitcham United in the FA Amateur Cup.

Following the merger in 1972, Crabtree Lane was sold for housing and the new club played at Hemel Hempstead United's Vauxhall Road, which had been opened in May 1948 as the Greenhills Club. The clubhouse and changing rooms burnt down in 1992 and the club had to use temporary facilities for five years. The ground has seated stands on both sides of the pitch, and in the early 2000s covered terrace stands were built behind both goals. The ground currently has a capacity of 3,152, of which 300 is seated and 900 covered.