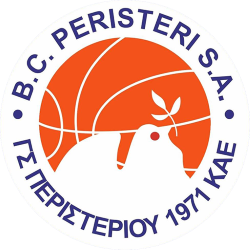 Peristeri B.C. (Greek: Περιστερίου K.A.E.), for sponsorships reasons known as Peristeri Vikos Cola, is a Greek professional basketball club that was founded on October 22, 1971. The club is located in Peristeri, Greece, which is a suburban municipality of the city of Athens. It is a part of the G.S. Peristeri (Γ.Σ. Περιστερίου) multi-sports club. The club's full name is Gymnastikos Syllogos Peristeriou K.A.E. (Γυμναστικός Σύλλογος Περιστερίου K.A.E.).

The club's emblem is the dove symbol, and the club's colors are yellow and blue. For the 2018–19 season, the team will compete in the Greek Basket League, the first tier league in Greece.

Peristeri Indoor Hall Andreas Papandreou, or Peristeri Arena, is an indoor sporting arena that is located in Peristeri, a western borough of Athens, Greece. The arena is named after Andreas Papandreou, the former Prime Minister of Greece, who died in 1996. It is located next to Peristeri Stadium. It is owned by the municipality of Peristeri. The seating capacity of the arena for basketball games is 4,000.