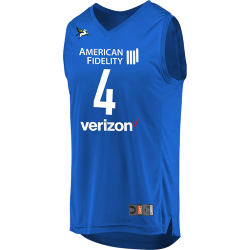 The Dallas Wings are a professional basketball team based in Arlington, Texas. The Wings play in the Western Conference in the Women's National Basketball Association (WNBA). The team is owned by a group which is led by Chairman Bill Cameron; Chris Christian is vice chairman and managing partner and Greg Bibb is COO of basketball operations. The team was founded in Auburn Hills, Michigan, before the 1998 WNBA season began and moved to Tulsa, Oklahoma, before the 2010 season; on July 20, 2015, Cameron announced that the franchise would move to Arlington for the 2016 WNBA season. College Park Center (CPC) is an indoor, multi-purpose arena on The University of Texas at Arlington campus in Arlington, Texas, United States. It seats up to 7,000 spectators.

Its primary tenant is the Mavericks athletic department including the University's basketball and volleyball teams. A secondary tenant during the summer season is the WNBA's Dallas Wings. It also hosts graduation ceremonies for UT Arlington, other private trade schools, and area high schools, along with concerts and events.

The arena is part of a 20-acre section of the campus known as the College Park District. Completed in 2012, the District includes a residence hall, student apartments, a welcome center, a credit union, a 4.62 acre park called The Green at College Park, restaurants, and three parking garages.