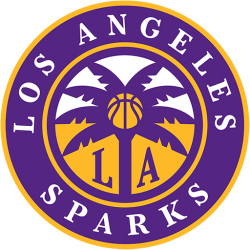 The Los Angeles Sparks are an American professional basketball team based in Los Angeles, California, playing in the Western Conference in the Women's National Basketball Association (WNBA). The team was founded before the league's inaugural 1997 season began. Like some other WNBA teams, the Sparks have the distinction of not being affiliated with an NBA counterpart, even though the market is shared with the Los Angeles Lakers and the Los Angeles Clippers. As of 2019, the Sparks are the last franchise to win back-to-back titles.

Lakers owner Jerry Buss owned the Sparks from 1997 to 2006 when Williams Group Holdings purchased the team. It was previously the sister team of the Los Angeles Lakers. As of 2014, the Sparks are owned by Sparks LA Sports, LLC.

The Sparks have qualified for the WNBA Playoffs in sixteen of their twenty years in Los Angeles, more than any other team in the league. The franchise has been home to many high-quality players such as 6 foot 4 inch center Tennessee standout Candace Parker, flashy point guard Nikki Teasley, and nearby USC products Lisa Leslie and Tina Thompson. In 2001, 2002, 2003, 2016 and 2017, the Sparks went to the WNBA Finals. They won the title in 2001, 2002, and 2016, beating Charlotte, New York, and Minnesota respectively, but fell short to Detroit in 2003 and Minnesota in 2017.

Being in a major national market, the Sparks have always been a focal point of the league; they faced New York in the league's inaugural game on June 21, 1997.

Staples Center (officially stylized as STAPLES Center) is a multi-purpose arena in Downtown Los Angeles. Adjacent to the L.A. Live development, it is located next to the Los Angeles Convention Center complex along Figueroa Street. The arena opened on October 17, 1999.